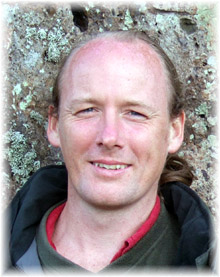 Despite some early exposure to classical music (including singing in my school's choral group) my first real musical epiphany was when in university at Durham I discovered the thriving local folk club, then crammed cosily into the tiny back room of the Colpitts Hotel – a group of local people with a shared love of (mostly unaccompanied) songs and their stories, and an innate sense of harmony. I was to go almost every week in term time for four years, amassing a significant repertoire of songs in the process – as well as teaching myself to play guitar. At the same time, I was involved in a regular free improvisation group (working both instrumentally and vocally), and gained an abiding interest in traditional music from elsewhere in the world – first hearing Georgian music when a concert by the Rustavi Choir was broadcast in July 1992.

Later a long-held interest in architecture developed into a fascination with the early Christian churches of Georgia and Armenia, and in summer 1998 I made an long overland journey to both countries, exploring many lesser-known corners of Georgia, but not at that time finding any traditional music. On my return – and disappointed with the concert-focused London folk scene – I first started getting involved in world singing in London, going to my first Georgian workshop – the first of many – with Mtiebi in 1999.

I was introduced to the choir in late 2000, starting at the same time that Venice Manley took over – and it was only then that the Georgian songs gradually reached deep into my soul. A major part of this was the inspiring way that Venice built the choir from a collection of individuals into a community – this is something that I have really tried to foster, organising residential weekends for the choir since 2002 which have become an important part of our calendar. When Venice became too ill to direct the choir, and then sadly passed away just before our trip to Georgia in 2004, I shared some of the musical direction – which continued until 2009, first as a trio, and then with Lucy. I like to think that my background in British oral tradition, song performance and improvisation bring a different and complementary perspective.

I have long had an interest in the extended possibilities of the human voice – I also taught myself overtone singing, which led me to Tuva in Siberia in 1999 – which also, perhaps surprisingly, gives insights into the Georgian sound – and I have been very moved to see the changes brought about in people's voices and lives by Georgian singing, both in extended workshops with Frank Kane (an inspiring worker with the voice as well as being a leading expert on Georgian song) and in their years with Maspindzeli. For me, Georgian singing is as much about the sound, and the meeting of sound, as the actual notes or words, and is a source of constant joy and inspiration.