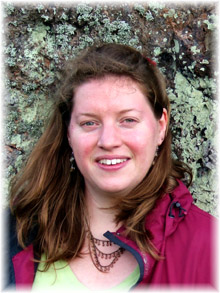 My early grounding was in classical music. As well as being involved with academic study, instrumental playing and composition, I was an active member of the Finchley Children's Music Group and New London Children's Choir, performing mainly 20th century music around the world, for concert audiences and recordings. My first degree was in Physics and Music, specialising in electronic music inspired by Berio, and I still sing with the Choir of the Orchestra of St John's, Smith Square.

My interest in natural voice work began when I attended some Frankie Armstrong workshops in the early 1990s. I channelled this interest by following a path in Balkan music, joining a dance group and meeting with other musicians to sing informally. Since 2000, I have studied Bulgarian singing with Dessi Stefanova, and performed with her in the Bulgarian trio, the Dessibelles. I have done session work for film and TV, when this type of clear voice is required.

I was taken to hear the Rustavi Ensemble at the Albert Hall in the late 1990s, but it wasn't until a workshop with the ensemble Mtiebi in 2000 that my interest in Georgian music was fired up. Despite uncharacteristically gate-crashing a supra which followed this workshop in order to hear more of this music, it wasn't until another workshop (the last one with Helen Chadwick at Wilderhope, in 2002) that I discovered Maspindzeli.

I joined the choir in November 2002, and since then, I have been an active member, learning and performing with the choir, and studying at workshops as an individual. I'm particularly interested in the work of Frank Kane, whose knowledge of Georgian music is profound, and who now concentrates on enriching the voice and its person through the investigation of vibration. In 2004, I provided musical leadership during the trip to Georgia immediately after Venice Manley died, and continued until 2009 as one of the trio - then duo - of leaders who worked together to direct the musical activities and development of the choir.